Debates over which party should bear discovery costs is something that has not changed with the advent of eDiscovery. In fact, the question is becoming even more urgent, as the costs related to the search, retrieval, and production of electronic data are on the rise. For larger cases, truly vast amounts of data must be collected and assembled in order to respond to just one discovery request. Decisions in the past have ranged from requiring the requesting party to bear all production costs to requiring that the producing party carry them. Is there an answer which may fall in between?

The History of Discovery Costs

Back in 1978, the defendant in Oppenheimer Fund, Inc v. Sanders was required to produce a list of class members so the plaintiff could give notice, which required the hiring of a third party to do the vast amounts of manual work involved. The Supreme Court ruled that the preceding order from the lower court ordering the defendant to solely bear that expense was an abuse of discretion, particularly since it was for the benefit of the plaintiff. The initial ruling was reversed, and the  plaintiff was ordered to bear discovery costs instead. This precedent has affected many rulings related to cost sharing.

When related specifically to eDiscovery costs, an even more important precedent has been set. In Zubulake v. UBS Warburg LLC, the Southern District of New York Court ruled that the producing party “bear the initial cost of searching for, retrieving and producing discovery” yet allows for costs later to be split between parties, according to seven factors.

Zubulake also describes five different categories of electronic storage methods. Two of these, backup tapes and erased or damaged, fragmented data, are considered by the court to be not readily available, making them subject to cost-sharing. The seven factors listed above are applied to the necessity of extensive electronic discovery in those two specific cases. In the original Zubulake case, the court ordered the requesting party to reimburse 25 percent of eDiscovery costs.

The cost-sharing standards set forth in Zubulake are not officially a national standard, yet their influence has spread far beyond the New York state line. Zubulake is the most commonly quoted precedent regarding eDiscovery cost-sharing. For most current cases, inaccessible data is subject to cost-shifting requirements due to the often costly methods used for eDiscovery, while readily available data is more easily produced and does not incur costs much in excess of standard litigation procedure. 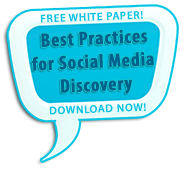